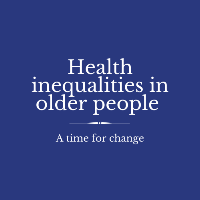 We have a fantastic line-up of speakers, from Academics, Public Health Care experts, Politicians to Community Members and Ambassadors for Older People. Please see the Speaker descriptions below for more information.

Dr Nikki Coghill has a background in public health and clinical exercise physiology. Her research focus is on health inequalities and evidence-based practice, leading to the utility and translation of research findings into the real world. This has been informed by her former, 12-year career working in Public Health. During this time, she contributed to national advisory groups and the writing of key national documents relating to older people and physical activity, as well as developing key initiatives focused on reducing inequalities in health.  Nikki’s work has involved working closely with Public Health England, Commissioners of Primary Care Services, Public Health Departments, Primary Care and the Government Select Committee on inequities in Health. Her work has included designing, implementing and conducting key pieces of research aimed at addressing inequalities in health as well as being invited to present key health recommendations to the House of Commons. Nikki has an interest in using community development approaches to reduce health inequalities. Recently, she has worked closely with Bristol City Council advising and evaluating key initiatives and making recommendations for increasing uptake of NHS Heath Checks among deprived communities.   Additionally, Nikki is working with colleagues from the ‘Health Equity Group’ at the National University of Colombia, Bogota, to devise ways of addressing inequalities in health among the displaced migrants, who are victims of the recent armed conflict.

Dr.Martin O’Neill, Co-director of the Aging Health and Disease M.Sc at the Geriatric Medicine Dept., University of Cardiff

Martin is currently co-director of the M.Sc in Ageing Health and Disease at Cardiff University School of Medicine. Following a varied career trajectory that led to various parts of the UK and eventually working for the NHS Martin returned to education as a mature student to pursue a degree which eventually led to the successful completion of a Ph.D. Martin has an academic background in sociology and social anthropology and over the years has developed a particular interest in  utilising action and participatory research. Much of his research has involved working with poor communities to develop solutions to the problems they face additionally he has also conducted research in relation to residential elderly care and the training of care home workers. Martin’s research interests include social and economic regeneration, health, aging and elderly care.

Jessica Francombe-Webb is a lecturer in the Department for Health at the University of Bath. She is a member of the Physical Culture, Sport and Health (PCSH) research group. Her research is focused on the operation of social power and identity struggles in relation to health practices (e.g., physical activity, exercise and diet). Specifically she analyses the intersections of gender, social class, disability and age. Moreover, she is interested in the impact of digital technology and the media in relation of health and wellbeing. Her research is driven by a dedication of creative and collaborative methodologies that result in co-generative knowledge production. In practice this involves projects that utilise participative workshops, action research inspired approaches, stakeholder focus groups and ‘policy change’ conversations. For instance, recent research funded by Age UK has focused on the lived experiences of a sport and physical activity initiative called Inspire and Include. This project explored the physiological, psychological and social experiences of older adults with disabilities who participated in sport and physical activity for the first time, as well as the volunteers who facilitated their experiences. Creative, visual methods were used to collect visual and spoken data to initiate change and inform future programmes implemented by Age UK. Following from this, she is working with her colleague Dr Rachel Arnoldi, to secure further Age UK funding to investigate the wellbeing of military veterans and digital support mechanisms. This research deploys action research principles in order to ensure sustainable, long-term change.

Lindsey Armstrong’s background is in health research with embedded patient and public involvement. As Research Fellow at the University of Exeter Medical School, Lindsey worked with Patient Advisory Groups in the co-creation of research and the development of surveys and patient materials for a multi-centre clinical study of treatments for rare metabolic disorders. Lindsey also established a Young Person’s Advisory Group which continues to help shape research into health and wellbeing at the University of Exeter Medical School. More recently she moved into a professional services role where she managed the Community Partnership Project, a partnership between the University of Exeter, Exeter City Council and Exeter City Futures, a community interest company which aims to make Exeter congestion-free and energy-independent by 2025.  Lindsey oversaw the Community Partnership Heavitree Project, a place-based project which is seeking to build capacity within the local community and co-create practical data-based solution(s) which will benefit the lives of local people.     Lindsey currently manages relationships between the University of Exeter, and the civil society, cultivating local community engagement activities and looking for opportunities for the university to work with local communities and civil society organisations in order to respond to local societal needs in a demand driven way.

Dr Brian Gibbons is a retired general practitioner based in Blaengwynfi in the Upper Afan Valley. He was a Member and Fellow of the Royal College of General Practitioners and Secretary of Morgannwg Local Medical Committee. He also served on the General Practitioners Committee of the BMA in Wales and the UK. In 1999 he was elected to the National Assembly for Wales / Senedd for the Aberavon Constituency and served until 2011. During that time he held a number of Government positions including Minister for Health & Social Care and Minister for Social Justice and Local Government.  Since retiring Dr Gibbons has continued to be active in his community in the Upper Afan Valley including acting as a director for Gwynfi Miners Community Hall and Gwynfi Community Co-operative. He is also a member of the Central Council of the Socialist Health Association and the National Council of Doctors in Unite the Union. He is also a trustee of the Wales Refugee Council. Dr Gibbons was raised in the west of Ireland and came to undertake vocational training in general practice in West Yorkshire in 1976. He joined the Upper Afan Practice with Dr Julian Tudor Hart in 1980.

Dawn Bowden, Member of the Senedd (MS) for Merthyr Tydfil and Rhymney

Dawn Bowden is the Member of the Senedd (MS) for Merthyr Tydfil and Rhymney. Dawn was elected to Senedd Cymru–Welsh Parliament in May 2016. Prior to that she worked as a Regional manager for the public services union UNISON, carrying a Wales-wide brief for members in the Welsh NHS. Upon her election Dawn was keen to establish a high profile presence in the centre of Merthyr Tydfil and her constituency office in the town supports an active case load service. Dawn has been a member of the Labour Party since 1983. She is also a member of the Socialist Health Association and a member of the Public Services union, UNISON. Her political views were shaped by her upbringing and by parents who were both trade unionists and Labour Party members. Dawn currently sits on the Senedd’s CYPE, ECLG Committees and chaired the Committee on Senedd Reform. Dawn is a football fan and while her lifelong love has been Bristol City she is also a season ticket holder at Merthyr Town FC.

Dr Nilufar Ahmed is a Lecturer in Social Sciences at Bristol University, a Psychotherapist, and a Trainer and Consultant in Applied Diversity and Inclusion Practice. She has a multidisciplinary background which includes Psychology, Sociology, Gerontology, and Human Geography. This translates as the dynamic relationship between people and place and how the fluidity of each constantly transforms the other.    Her work is positioned within an intersectional framework that interrogates the impact of a range of social inequalities. Most recently she has received funding as part of a small group of therapists to examine issues of inclusivity in the training of therapists.  Her expertise lies in qualitative research, including qualitative longitudinal research, particularly with minority and disadvantaged groups.  Her interests include home and belonging, care, mental health, and gender.  She has worked with a range of minority communities and is passionate about inclusion in research of minorities as academics, participants and advisors.

Paul is a public health consultant at B&NES Council, leading on a variety of areas including inequalities, substance misuse, suicide prevention and sexual health services.  He is also part of the council’s COVID-19 Health Protection Board, overseeing the Local Outbreak Management Plan. Paul has a particular interest in mental health and represents the Association of Directors of Public Health on the National Suicide Prevention Strategy Advisory Group.

Eva Elliott is an Honorary Research Fellow at Cardiff University School of Social Sciences, and remains active as a researcher with an external independent research company. Eva’s academic interests have focused on health inequalities and the unjust social and economic determinants that sustain these.  She has conducted, or advised on, a multiplicity of large scale national evaluations of community or place based interventions, most of which have had some focus on the collective resources and powers required to improve health and wellbeing and to influence neighbourhood and wider systemic social change. She has also held other positions, including Director of the Wales Health Impact Assessment Support Unit (now based within Public Health Wales); PI and CI on two major Connected Communities projects (a ten-year cross Research Council programme (led by the Arts and Humanities Research Council on the changing nature of communities and the role they play in enhancing wellbeing and in social and economic change); academic lead for one of Cardiff University’s flagship engagement projects: Strong Communities, Healthier People; and the academic lead for the Cultural Participation Research Network in Wales.

Judith Brown is Chair of Bristol Ageing Better, and currently working with other Ageing Better areas to produce resources for the U.K. Part of the original team who applied for Big Lottery money to help lonely and isolated older people and successfully won 5.9. million pounds for the city, she remains Deputy Chair of Bristol Ageing Better. She is a longtime co-optee of Bristol City Council’s Scrutiny committee dealing with Health and social Care, now called “People”, and is currently a member of an NHS Patient Advisory Group and the NHS Fragility Board. Having nursed her Mother-in-Law at home until her death from an inoperable brain tumour, she has particular concern for the needs of carers. Judith was a State Registered Nurse in 1961, when she got married. Married for 59 years Judith was widowed this April. She is a mother and grandmother. She has worked in radio, then Welfare Rights, worked as a Tribunal Officer representing people before the Social Security Appeals Tribunal, (having taken a year’s sabbatical) of which she was a member for 17 years. Other voluntary work included election as a Parish and District Councillor.  Judith became a Senior Training Officer in Social Services, then a Lecturer in Health and Social Care. The Babbers Show for older people, which Judith took turns to present on Ujima Radio, ran for 5 years, ending on August 31st this year, but the team hope to resurrect it in the future, Judith has just become a Trustee of Age UK Bristol, and is looking forward to contributing to their work.

Stacey is a community researcher, event organiser, trainer, facilitator, Community Worker, Parish Councillor & Wellbeing worker. As well as her day job with charity Creativity Works she has worked with the University of Bath to support and deliver community based participatory research programmes in B&NES and now across the South West.

Health inequalities in older people: A time for change